Have you decided yet? Who will win the debate? Will you put up with Boris to get Brexit? Week 2 of my General Election Dashboard

In this pre-debate, pre-manifesto stage of the campaign, my latest round of polling finds no signs of a seismic shift in opinion so far. We find a similar picture to last week’s, including a clear lead for Boris Johnson over Jeremy Corbyn as best Prime Minister and, in a forced choice, an overall preference for a Johnson-led Tory government over a Corbyn-led Labour one. Leave voters, however, appear more settled in their voting decisions at this stage than remainers. There are some small changes, but most are well within the margin of error.

When we ask people how likely they are to vote for each party on a 100-point scale, we find the Conservatives’ mean score up slightly since last week from 33 to 36, with the other parties unchanged: Labour on 25, the Liberal Democrats on 17, and the Brexit Party (asked only of voters in non-Conservative seats) on a mean score of 11.

Leave voters’ mean likelihood of voting Conservative is 61, with the Brexit Party (in non-Tory seats) on 24, and Labour on 11. Remain voters’ average likelihood of voting Labour is 40/100, ahead of the Lib Dems on 31, the Conservatives on 18 and the Greens on 16. The Lib Dems’ highest likelihood scores, apart from their 2017 voters, come from those who say they want to remain in the EU but with a Prime Minister other than Jeremy Corbyn. Boris Johnson’s lead over Jeremy Corbyn as “best Prime Minister” remains steady at 20 points, compared to 19 points last week. The proportion of 2017 Conservative remainers naming Johnson is up from 65% to 71%, but among Labour leavers it is down four points at 40%, with a corresponding increase in “don’t knows” – still only 23% of them say they think Corbyn would be better. Those who say their ideal outcome would be to leave the EU but with a PM other than Johnson nevertheless say he is the best choice of the two PMs on offer, by 41% to 17% with 42% saying they don’t know). When we forced people to choose between a Conservative government led by Boris Johnson or a Corbyn-led Labour administration, Johnson and the Tories came out ahead by 12 points (56% to 44%), down from 14 points last week, but with only a one-point move at either end. Among 2017 Labour leavers, the preference for Johnson and the Tories was down from eight points to four. People who ideally wanted Brexit without Boris still preferred a Johnson-led Conservative administration to Labour and Corbyn by 64% to 36%. The proportion saying Jeremy Corbyn as PM would be worse for Britain than leaving the EU is unchanged at 49%, with 38% taking the opposite view. The proportion of both Conservative and Labour remainers saying Corbyn would be worse is fractionally up on last week, but the number of Labour leavers taking this view is down slightly from 58% to 52%.

Both groups whose Brexit preference clashed with their Prime Ministerial one said EU policy was more important to them. Among those who wanted Brexit but with a PM other than Johnson, more than two thirds (68%) said that if they had to choose, they would leave the EU and put up with Boris in Downing Street. Exactly the same proportion of those who wanted to remain but without Corbyn said they would put up with him in Number Ten to stop Brexit. As last week, the most frequent answer when we asked what specific election stories people had noticed in the past few days was “none”. Notably, public spending promises, Labour’s free broadband policy, floods and the NHS were all mentioned more often than Brexit. Twice as many people expect Boris Johnson to win tonight’s ITV debate as think Jeremy Corbyn will come out on top. 36% think Johnson will win (including 21% who think he will do so “easily”), while the 18% who name Corbyn are equally divided between thinking he will win easily and that “it will be close.” Nearly one in five think “there will be nothing to choose between them,” and nearly three in ten say they don’t know who they expect to do best. 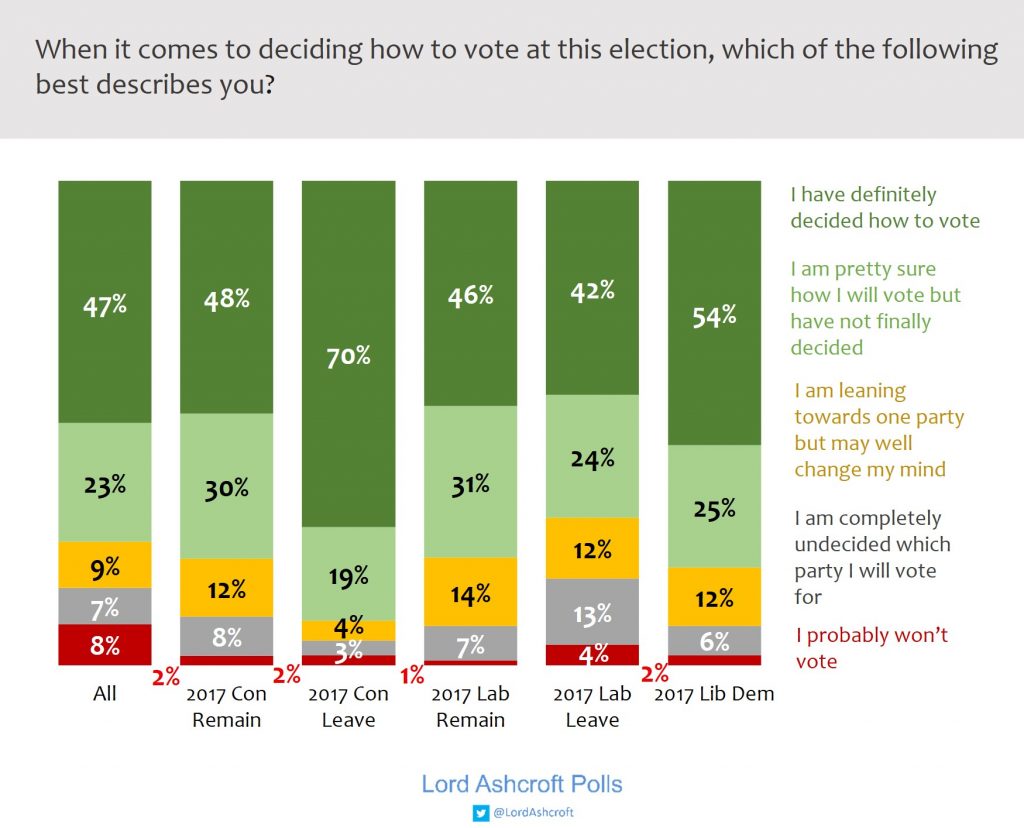 Just under half (47%) of respondents said they had definitely decided how they would vote on 12 December. Those leaning towards the Conservatives were the most likely to say they had decided (68%), with only just over half (54%) of Labour leaners and only 37% of those most inclined to the Lib Dems saying they had made up their minds. Seven in ten 2017 Conservative leavers said they had definitely decided, compared to just 48% of Tory remainers. Labour remainers were slightly more likely to say they had finally decided (46%) than Labour leavers (42%).

More than half (56%) of voters expect the Conservatives to have the most MPs after the election, though most of these think this will be within a hung parliament – only 22% say they expect a Tory overall majority. Those leaning towards the Conservatives are the most likely to expect an outright victory, but fewer than half of them (47%) do so. Only just over one in ten expect Labour to come out on top, either as the largest party in a hung parliament (8%) or with an overall majority (3%).

Most voters (53%) expect Boris Johnson still to be Prime Minister after the election, including 86% of those currently leaning towards the Conservatives. Those saying they are most likely to vote Labour are evenly divided between expecting PM Johnson (32%), PM Corbyn (32%) and saying they don’t know who will be in Downing Street in 23 days’ time (35%).

Our map of the campaign shows how different issues, attributes, personalities and opinions interact with one another. The closer the plot points are to each other the more closely related they are. This week we see, for example, that those in Conservative territory are most likely to have decided how to vote, while those who are less sure are more likely to be in the remain/Lib Dem part of the map. It is also notable that the most likely Brexit Party voters have moved: this week we only offered the party as an option to those in non-Conservative seats, and have found that having been close to likely Tory voters last week, it is now found closer to 2017 UKIP territory.