Michael Ashcroft’s new book goes in search of the man who wants to be Prime Minister and reveals previously unknown details about him which help to explain what makes him tick. END_OF_DOCUMENT_TOKEN_TO_BE_REPLACED 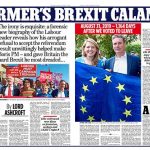 Here, in the final part, we explain how the die-hard Remainer may well have unwittingly secured Boris Johnson’s 2019 General Election triumph and a much harder Brexit. END_OF_DOCUMENT_TOKEN_TO_BE_REPLACED

Overall, I found people more likely to think the government had underreacted to the pandemic than overreacted. Half of 2019 Conservative voters thought this – including two thirds of those who had switched from Labour – as well as more than six in ten voters overall END_OF_DOCUMENT_TOKEN_TO_BE_REPLACED

But the criticisms are many: why did we not take action sooner, people ask, at the very least by restricting flights from covid-hit countries like China? END_OF_DOCUMENT_TOKEN_TO_BE_REPLACED